Raising a Family in The City: The Best Playgrounds in Boston

In the “old days” young professionals would relocate to the suburbs when they decided to start a family, but over the past few decades a major shift took place and major cities, including Boston, focused on becoming more family-friendly in order to keep residents from moving. While 2020 saw an increase in moves out of the city and into the suburbs, Boston continues to be one of the most family-friendly (major) cities in the country.

One of the greatest advantages to the constant state of development in Boston is the creation, investment and revitalization of parks and playgrounds in every neighborhood. In recent years, innovative and inclusive playground designs have replaced older models, wooing even people without children. Many playgrounds around the city occupy prime real estate, offering their visitors a peaceful retreat with sweeping views of waterfront areas or the skyline. So, whether you live in Boston Proper, you’re heading in from the suburbs, or you’re relocating to the area, these are the places to go if you have kids in tow. It was difficult to choose, but we narrowed it down to our Five Favorite Playgrounds in Boston:

Bostonians hold this park close to our hearts as it pays tribute to Martin Richard, the youngest fallen angel of the April 15, 2013 Marathon Bombing. The beautiful park occupies a previously vacant space next to the Boston Children’s Museum at the crossroads of Downtown and the Seaport. It unfolds over varying levels, intertwined with intentional landscaping and built to mimic nature. A marooned pirate ship sits atop one of the higher peaks of the playground, allowing young explorers to climb aboard and imagine their own adventures.

A large footprint on the edge of East Boston facing the Waterfront/ Seaport area, this park has something for everyone. The enclosed playspace has 2 structures with a sprinkler in the middle and a couple swing sets. Outside of the play area is a large area of green space; one corner is occupied by the Piers Park Sailing Center (which hosts a fantastic summer camp), and a long pier extends out from the other corner. Additionally, there is a natural amphitheatre where you’ll find events and live music on the weekends (including the Zumix Sunday concert series) and a small workout area is hidden on the far side of the park.

Revitalization of the park began under Mayor Menino and continued with further investment from the Walsh Administration. The park features a tot-lot, bigger kids area full of webbed climbing equipment, a splash pad and an adult fitness space. Urban greenery abounds at Hunt-Almont with baseball, football, lacrosse and even a cricket field. On any given day, you might be able to catch a glimpse of  the Franklin Park Tennis Program, one of several pop-warner football teams or the Mattapan Patriots cheer squad.

Menino Park was crafted with active play, physical therapy, recovery, relief and respite in mind. This inclusive playground sits on its own small peninsula in the Charlestown Navy yard, just steps from the Spaulding Rehabilitation Hospital and includes a wheel-chair accessible merry-go-round, a ramped play structure, and embankment slides and climbers. Granite blocks that once held back seawater now provide seating and give way to elevated green space to enjoy the view of Boston Harbor.

Conveniently located next to the Chinatown Paifang Gate, this colorful playground is perfect for a quick run-through on your way to a delicious meal. Unlike the other parks on the list, this Chinatown play area is quite small–consisting of just a couple stacked-cube play-structures and a slide. A bamboo-lined River Stream sits to one side of the play area and often the older generations of Chinatown residents can be found at nearby tables engrossed in games of Mahjong.

With 217 parks, playgrounds and athletic fields in Boston, our Best Playgrounds list (admittedly) doesn’t even begin to scratch the surface, but for families that are visiting the city with relocation in mind, this is a little taste of what Boston has to offer for your family. To find more of these fabulous parks and playgrounds, visit Boston Parks and Recreation.

Planning a move to Boston (or the surrounding area)? Get a Free Estimate from Exela Movers. 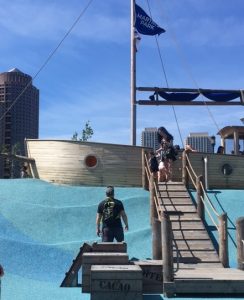 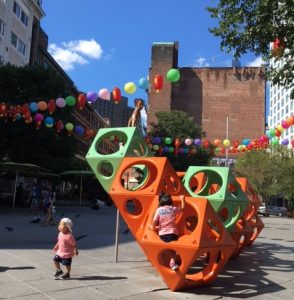