All across Massachusetts, we eagerly anticipate the time between Memorial Day and Labor Day, which we lovingly refer to as Summer. For 9 months of the year, we count down: awaiting the sunshine, bodies of water, weekend getaways to the Cape, and generally vitamin-D filled days. Officially, we’re about 3 weeks ahead of schedule–summer doesn’t begin until the third week of June and ends the third week of September, but there’s no debating the fact that these are the best 3+ months of the year in MA and so, Summer it is!

The beginning of the summer is a major transition time in Boston: many of the 150,000 students who populate the city head out and a new temporary group of summer people are ushered in: a mix of students, workers and travelers. The majority of Boston leases begin on September 1st, allowing for a few open months when apartments are available to sublet–maybe it’s designed this way intentionally, maybe not…but it works out nicely for the international seasonal workers who flood the state (mainly Boston and the resort areas like Cape Cod, Nantucket and Martha’s Vineyard) to fill the abundance of temporary jobs that become available during this time.

Traditionally, this also coincides with the busiest time of the year for moving companies–SnowBirds coming back up from FL, locals fleeing to their summer homes on the Cape and Islands and multitudes of Bostonians moving apartments ahead of crunch-time to avoid the craziness of September 1st.

For years, moving companies shared in the experience of hiring “J1s”–foreign students granted short term work/ travel Visas during their summer break from University. European students, mainly from Lithuania, Ireland, Romania, Ukraine and Croatia, would spend the summer in Boston working as full-time movers until Labor Day weekend and then spend the last couple weeks traveling before returning to their Universities to resume their studies. The benefit was mutual–the students took their jobs seriously. They came to work hard and make money, practice their English and get a taste for true American culture; and in the process, friendships were forged and lasting impacts were made. Unfortunately, in recent years, it became increasingly difficult for moving companies to hire J1 students because of the physical nature of the work–there was concern about injuries and insurance liability.

Without the prospect of hiring J1s, many moving companies in Boston apply for H2B Visas to bulk-up their crews for a busy summer of moving. Whereas J1 students generally seek out employment and handle the bulk of the Visa procurement from their end, the H2B requires more effort from the employer. There are a finite number of H2B Visas to be distributed throughout the USA, half for winter seasonal work and half (plus any surplus) for summer, so it can be competitive. But, for those companies that are able to obtain them, the experience of hiring foreign workers remains extremely positive:

“For small or seasonal businesses, the H2B visa program has been a valuable lifeline. In cases where there are not enough U.S. workers willing or capable of performing one-time, seasonal, peakload or intermittent services, the program allows employers to hire foreign workers on a temporary basis to fulfill these labor needs.”  The H2B Program Has a Positive Impact at Every Corner by Joe Schill [READ MORE]

Often, the same workers will return to work for the same companies year after year, building on their experience, which ultimately benefits the worker, company and customer. And while H2B workers may be less focused on the summertime fun that Bostonians look forward to all year long, we can assume that when they head back to their home countries, they have plenty of stories to tell about their experiences in America. And, every once in a while, the opportunity to work abroad may just blossom into the true American Dream…just ask Alexe Suciu, the Owner of Exela Movers, who started out as an H2B worker a decade ago and years later fell in love, got married and started his own moving company here in Boston [READ ALEXE’S STORY]!

Need to move? Get a Free Estimate from Exela Movers 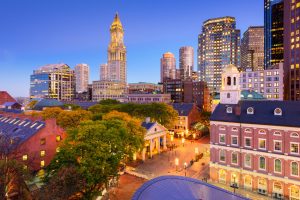