Moving & Trucking Companies have been deemed Essential Workers during this unprecedented time, so don’t they deserve a little recognition for the good that they do?

…We think so, and we’ve compiled our

in hopes of Squashing that Bad Reputation once-and-for-all:

What began in the 1990s as one man’s dream to honor US Veterans has grown to an annual tradition that would not be possible without the Volunteer Support & Participation of the US Trucking Industry. “In 2014, Wreaths Across America and its national network of volunteers laid over 700,000 memorial wreaths at 1,000 locations in the United States and beyond, including ceremonies at the Pearl Harbor Memorial, as well as Bunker Hill, Valley Forge and the sites of the September 11 tragedies. This was accomplished with help from 2,047 sponsorship groups, corporate contributions, and donations of trucking, shipping, and thousands of helping hands.”

Two Men and A Truck, the largest franchised “local” moving company in the country (and operating worldwide), has made it a priority to give back to the communities that they serve since their inception in the early 1980s. “Each spring, TWO MEN AND A TRUCK® locations across the country collect donations for women in need and deliver them to local women’s and family shelters on or before Mother’s Day.”

Founded in Boston back in 1980, Gentle Giant has now expanded its operations to 10 states across the country, but owner Larry O’Toole has never lost sight of his commitment to giving back. “We feel fortunate in our ability to settle our customers into new homes each day, and we work [through multiple organizations] to extend the same opportunity to those currently without a home of their own.”

Started in 2005 and franchised in 2007 (with MANY locations throughout the US & Canada), College Hunks Hauling Junk & Moving might sound like a Spoof Company, but their desire to do good is No Joke. “College HUNKS® has partnered with Feeding Children Everywhere as part of our commitment to be a community-conscious, values-based company. Through our partnership with FCE, we are committed to making a hunger-free world possible by donating two meals for every job we complete. We have donated over one million meals and counting to this world-changing cause.” 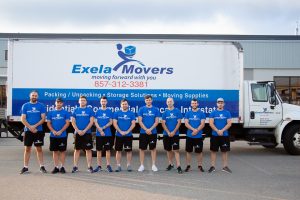 “Move For Hunger has created a sustainable way for the relocation industry to reduce food waste and fight hunger.” Since 2009, MFH has built a network of “Socially Responsible Relocation Companies” through which they have received donations equal to 13.8 Million Meals to feed those in need in our communities Nationwide. Exela Movers is proud to Partner with Move For Hunger to join the fight! Ask for more information about Donating Your Unwanted Food when you book your Move.

In Reality, our Top Five list barely scratches the surface; The Truth Is: on a daily basis, Moving & Trucking Companies across the country are Donating Their Time and Resources to help out in Their Communities–and it’s not for good PR, it’s because they Genuinely Care.  So, the next time you hear about a Shady Operation *SQUASH IT* and remember that for Every Negative Story you hear, there are many, many more Positive Stories that you didn’t hear.

“It takes many good deeds to build a good reputation, and only one bad one to lose it.”—Benjamin Franklin